Beatrix Potter & the Unfortunate Tale of a Borrowed Guinea Pig

Beatrix Potter really needs no introduction to readers.  Many, many children have read The Tale of Peter Rabbit or any of her other stories.  At this point in Potter's popularity, you can decorate a nursery with bedding and toys based on Potter's illustrations.  You can mention Mr. McGregor in casual conversation, and your listener will know about what that farmer did to Peter Rabbit.  Beatrix Potter crafted these whimsical little books with care and love, and that still shows through today.

Frances and Gloria both went through periods where they wanted to read tons of Beatrix Potter stories.  Surprisingly, we do not own any of the stories, but our library has a special boxed set.  We would check out one or two each visit.  Their tiny size, the charming illustrations and the stories contained within really captivated the girls.  So those memories of time spent with Potter's tales made the girls want to read Deborah Hopkinson's story about Beatrix Potter's childhood. 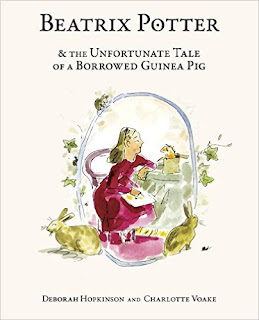 The story begins with a note written directly to the reader.  It helps set the stage for the story, but telling readers that Beatrix is a young girl at this point, and that her story might keep children from wanting to lend out their pets.  It's definitely an intriguing tactic.  Then Hopkinson goes on to explain that Beatrix (and her younger brother, Bertram) have a wonderful space for themselves in their house, which includes room for their art, their science experiments, and lots of pets.  Beatrix loved animals, and had a collection of them.  At various times there was a frog, a canary, a snake, a turtle, and many, many others.  It seems like a lot of pets, but it wasn't quite enough.  Because Beatrix liked to draw and paint these animals, and "she liked to paint them doing ordinary, everyday things, like reading the newspaper, working in the garden, or taking tea. (And why not?)"  And the problem then is that she wants to paint a picture of a guinea pig.  Of course, guinea pig was not one of the pets I listed above.  So Beatrix has to borrow one.

Beatrix feels terrible that Queen Elizabeth has died, and when she goes to apologize to her neighbor, she brings a painting of the guinea pig that she completed.  Even though the neighbor is so angry, she ends up keeping the painting.  All those years later, that illustration ended up being worth quite a lot of money after Beatrix Potter became famous.  Did it make up for the loss of the guinea pig after all?

First of all, I found the combination of author and illustrator in this book absolutely charming.  Charlotte Voake's illustrations are delicate and sweet, so they echo Potter's very nicely.  But they also have an added touch of modern sensibility and personality.  It is the same with Hopkinson's text.  It mimics Potter's tone, but it has that wink at the reader.  Hopkinson's voice pokes a little bit of fun at the situation.  Even when there is tragedy, such as the guinea pig dying, there is still a moment of brevity.  The format of the book also resembles the small white books that Beatrix Potter and her publisher created.  There are some clever design choices made here.

There are some other good choices made here - the choice to focus on Potter's childhood helps keep someone who is famous relatable to children.  Beatrix seems just like most other children, with their love of pets and wild animals.  There is a lesson told here, about taking care of the animals that you are responsible for, but it doesn't hit readers over the head.  Instead they will be taken by the combination of humor and creativity that are described in these pages.  Hopkinson also has included pages from Potter's own journal to illuminate the predicaments she allowed her pets to get into.  It helps attract a wide range of readers to the story as well.

Finally, as always, there is some fantastic back matter.  There is a P.S. which gives more information about Beatrix Potter and the story.  Hopkinson also lists some websites where readers can find more pictures of the guinea pig drawing and other Potter artifacts.  Finally, Hopkinson gives notes on this particular story, mentioning what has been taken from other sources and what has been invented.  I think this is an important distinction, particularly in a picture book format.  It helps students who might be using this as a source be able to figure out what is true and what isn't.

I was so lucky to be offered a chance to review this picture book as part of Deborah Hopkinson's blog tour.  I have enjoyed this book very much, and I hope you'll pick it up and learn something new about Beatrix Potter.  We certainly did. 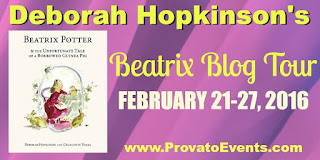 Thanks again to Deborah Hopkinson for appearing.  For other stops on the Beatrix Blog Tour please check deborahhopkinson.com.

Susan Murray
I was a children's and teen librarian for many years, and have reviewed picture books and nonfiction for School Library Journal for 15 years. I have two little girls - Frances, age 7 and Gloria, age 5 (not their real names - to protect the innocent!). I currently work for the MT Office of Public Instruction.